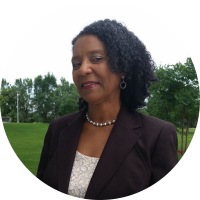 Bio: Stephanie Johnson Wright (Believer, Wife, Mother, Grandmother, Vivian's Daughter, Attorney, Pilot, Podcaster)
Stephanie first came to know the Lord as a child at St. Matthew’s the Apostle Church in St. Louis, Missouri. She made a formal commitment of her life to Jesus Christ in 1975 after a salvation experience in her kitchen in Lubbock, Texas. She has served in various churches since 1975, as an adult and youth Sunday School and Vacation Bible School teacher; Bible Study instructor; choir member; pastoral council advisor; and served on numerous committees. Stephanie actively supports CGM and the Church of Grace and Glory Media Ministries. She has been referred to as "Priscilla,” wife of Aquila, two missionaries who traveled with the Apostle Paul. Beginning in 2005, she traveled on missions to the Philippines, South Africa, Israel, the Dominican Republic, France, and throughout the United States. Through CGM, she continues to support local, national and international ministries.

In 2012, Stephanie began filming, editing, and producing videos for CGM and other non-profit organizations. The first film to launch CGM’s media ministry was, “Reflections of Faith,” the testimonial of her brother, Earl “Durkee” Johnson. CGM broadcasts through public access television stations reaching a population of more than one million. She has taken courses in videography and editing at Hawkeye Community College in Waterloo, Iowa, and the Colorado Film School in Denver, Colorado. CGM’s film motto is, “We Promote Them Who Promote Him.”

Stephanie started CGM's first podcast on June 20, 2020. CGM Presents podcasts cover every aspect of life from "A" to "Z" while applying Bible principles to 21st-century living. The presentations are informative and inspirational while weaving in a dash of humor to uplift and encourage listeners. Most of all, it leads the listener to a deliberate inquiry into their own relationship with the Lord. Click here to listen to the podcasts: CGM Podcasts

Stephanie has been a licensed attorney since 1992 and became the first African-American assistant district attorney in the Northern District of Iowa in 1994. She has received awards for her defense of persons with disabilities through enforcement of the Americans with Disabilities Act. She retired with 25 years of government service in 2018. Stephanie is also a licensed private pilot and has helped pilot aircraft on missions to remote islands in the Philippines. She helped establish the media division of CGM, Nina J Productions, with two fundraising Christmas CDs, "I Love Christmas" followed by “We Love Christmas” in 2018. She is also a contributing author to the Talitha Cumi series of books published by Habakkuk Publishing.

Stephanie has been married to Apostle Charles Wright since 1972. They have two daughters and five grandchildren. She loves the Lord and she knows He loves her and for this reason without hesitation she says, “Because of Jesus Christ, there is no other woman in this world that I would rather be than me!”