CGM is a local, national and international missions ministry.  We are commissioned to Christian service, to the unconverted, and especially to the household of faith in the nation and worldwide as described in Isaiah 61:1-3.

Learn more about our Board Members﻿. 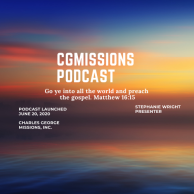 What we do is what we have done since 2004 - support ministries locally, nationally, and internationally. We also have a media ministry established in 2012.

On June 20, 2020, "CGM Presents: In the Word Podcast" was launched. These podcasts cover every aspect of life from "A" to "Z" while applying Bible principles to 21st-century living. The presentations are informative and inspirational while weaving in a dash of humor to uplift and encourage listeners.

We are currently in our seventh series, "Empowered Through Fasting" and the preceding six series are:: "Empowered Through the Holy Spirit"; "Christmas Podcasts"; "More Than Conquerors"; "Queen Esther"; Bible Bad Girls Gone Good"; and the first series, "Ruth and Boaz." We have produced more than 70 episodes and reached 31 countries. Click here to access the  Podcast

Stephanie Wright, CGM's media director, is the presenter of this podcast series. To learn more about her click on this website at: Meet the Media Director

In late 2019, Apostle Charles was invited to participate in a local prison ministry. The group taught Bible study and brought encouragement to men who are incarcerated.

2019 Missions to Ecuador and Alaska:
In May 2019, Apostles Charles and Stephanie visited the cities of Quito and Cuenca, Ecuador, on an exploratory mission trip. They made contact with an organization that has a sincere heart to do Christian work in Cuenca, Ecuador. Many needy people in Ecuador receive assistance from ex-pats (e.g., Americans who live outside the U.S.). Here is the link to pictures and videos from the Ecuador mission: Mission to ECUADOR
In August 2019, August 27 to September 1, 2019, Apostles Charles and Stephanie went to Alaska to support the Oyoumicks, an aviation missionary family. We learned much about the life of this family and their dedicated service to the Lord for missions to remote areas of Alaska. Here is the link to see a video and learn more about the Oyoumicks and the Alaska mission: Alaska Mission 2019

In 2017, CGM focused on its media ministry. We produced more than 50 Bible Study presentations and a series entitled, "The Widow's Might." We also continued to support ministries locally, nationally, and internationally and served as mentors to other non-profit organizations. More details in the December 2017 Newsletter (see below).

See our  Newsletter  for 2015-2016  for CGM accomplishments during these years.

In 2014, CGM celebrated ten years in missions. Click here to see details of the celebration.

In 2013, Apostle Charles G. Wright headed a team of six to the Dominican Republic. The team included Dr. Timothy A. Treadwell, Pastor of Performing Christ Church in Chicago, Illinois, and Chief Prelate of Grace Covenant Fellowship, International.  Also, Cassie Wright returned to head up the Vacation Bible School in Baitoa and Santiago where approximately 166 youth learned about God's Heroes. She received assistance from Lady Stephanie Wright, Robert Royston, Jr., and Alexander Royston.  This was a Mission of Healing because so many lives were touched with spiritual, physical, and emotional healing.  The young and the elderly; men, women and children were renewed and restored.  God answered so many prayers for healing and he answered them quickly!  Thank you to the pastors of Centro Cristiano Emanuel, Pastor Fernando in Baitoa and Pastor Felix in Santiago, who welcomed Apostle Charles, Apostle Treadwell, Lady Stephanie, Sister Cassie, Robbie and Alex into their churches to bring the Word of God to the people and the youth.  Thank you to Brother Leo, Pastor Cherilyn, their family and friends for watching over us while we were in their country.  May God bless all of our supporters who helped to make this Mission of Healing a success!﻿

In 2012, Israel was our mission destination.  Click on "Mission: Israel" to the left to see the "trailer" that shows a portion of the many places in the Holy Land that were videotaped and photographed for our Bible studies and future television series.  Apostles Charles G. Wright and Stephanie Wright took more than 700 video clips and photos during this mission to Israel. The journey included well-known Biblical sites, events, and characters from the Old Testament and New Testament. To name just a few: ﻿﻿﻿﻿Jerusalem, Garden of Gethsemane, Mount of Beatitudes, Pool of Bethesda, Jordan River, Sea of Galilee, David's Tomb, the Dead Sea, the Upper Room, Mount of Olives; ﻿the Elah Valley (where David defeated Goliath); the path Jesus traveled from the Garden of Gethsamene to his imprisonment to his crucifixion; Prophetess Deborah and Barak battlefield; Mount Nebo; Capernaum (Jesus' headquarters); the Southern Steps where Jesus taught; the Negev Desert; Megiddo; Masada; Mount Temptation; and much more.

In 2005 through 2007, we preached and ministered in five, remote Philippine Island churches in association with Pacific Mission Aviation (formerly "Flying Medical Samaritans").  Apostle Charles Wright was the first non-Filipino to preach in these churches.

In 2008, we ministered in Guam and Micronesia (Pohnpei).

In 2009, Sister Cassie Wright, joined CGM in ministering once again to churches and an orphanage in the Philippine Islands.

In 2010, we ministered and preached the gospel in three cities in South Africa which include Johannesburg, Pretoria, and Cape Town.  We increased our missionary numbers when two members of Gift of Life Church joined CGM on this "Mission of Love."

We also support other ministries and non-profit organizations in the United States and throughout the world.

We thank God for a successful celebration at CGM's 10th Anniversary at the PIPAC Park Place Event Center, Friday night, July 25, 2014.  To see and order photos and to view the Program Book click here: 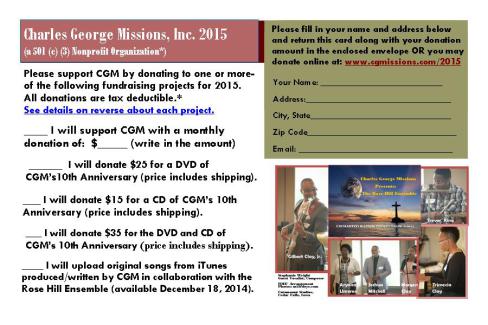